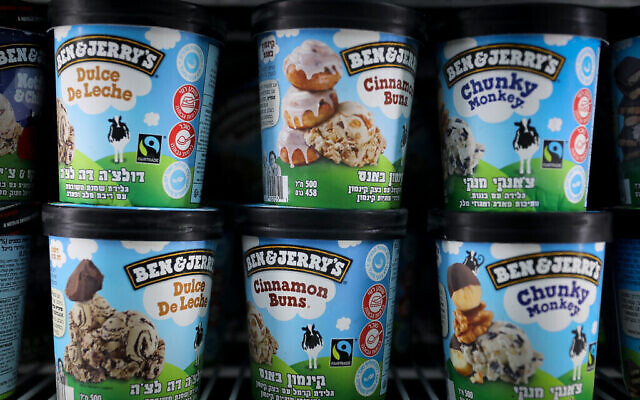 KOSHER retailers in Australia this week joined a global Jewish protest against the Ben & Jerry’s boycott.

Contacted by The AJN on Tuesday afternoon, Kraus in Ripponlea, Melbourne, said, “Due to the recent decision by Ben & Jerry’s … we will no longer be stocking their line.”

The sentiment was echoed by Kosher Kingdom in Elsternwick who said they were “working on removing the brand”.

By Tuesday evening, the store had posted online, “Due to recent statements made by Ben & Jerry’s ice cream we have decided to stop selling their product … we stand with Israel.”

Krinskys in Bondi told The AJN it was not a brand they stocked.

Ben & Jerry’s was also taken off the Kashrut Authority of Australia and New Zealand directory.

In the US, meanwhile, there was a social media push to convince kosher certifier KOF-K to remove Ben & Jerry’s hechsher, as a growing number of kosher supermarkets announced they would stop stocking Ben & Jerry’s products.

Communal leaders in Australia hit out at the ice cream manufacturer’s decision.

Zionist Federation of Australia president Jeremy Leibler said, “This move leaves a bad taste in the mouth. It’s a sad and sorry example of a company buying into the anti-Israel BDS agenda. The size and popularity of Ben & Jerry’s provides it with an opportunity to bring Israelis and Palestinians together. Instead, this will drive them further apart.”

Colin Rubenstein, chief executive of the Australia/Israel & Jewish Affairs Council, concurred. “Ben & Jerry’s will stop selling its ice cream to 440,000 Israelis and five million Palestinians in the Palestinian Territories because it is ‘inconsistent’ with their values. We say to Ben & Jerry’s your decision is inconsistent with a two-state peace.”

Stating the boycott was “intended to make the decision-makers at Ben & Jerry’s feel virtuous and aligned to fashionable progressive causes, “co-CEO of the Executive Council of Australian Jewry Alex Ryvchin told The AJN, “Ceasing to sell ice-cream to Jews who live on the wrong side of a defunct armistice line will have zero practical consequence. It will cause no policy change or aid the resumption of negotiations. It will merely contribute to a dangerous view that Jews living in east Jerusalem and the West Bank constitute some grave danger to world peace and their isolation and removal is a burning priority that outranks scores of territorial disputes and nationalist conflicts. This is a sentiment that has seen Jews around the world violently attacked.”

Dvir Abramovich, chairman of the Anti-Defamation Commission said, “No other country, region or people have been punished and denied access by Ben & Jerry’s to its products, and there is something fundamentally wrong when the only residents in the world discriminated against are Jewish citizens.”

“Additionally, attacking people who try and distinguish between sovereign and non-sovereign Israel by calling them antisemitic is to evade a matter of fact, abuse the meaning of ‘antisemitism’ and ultimately gaslight those who would try and work towards a future of equality and justice for Israelis and Palestinians alike.”