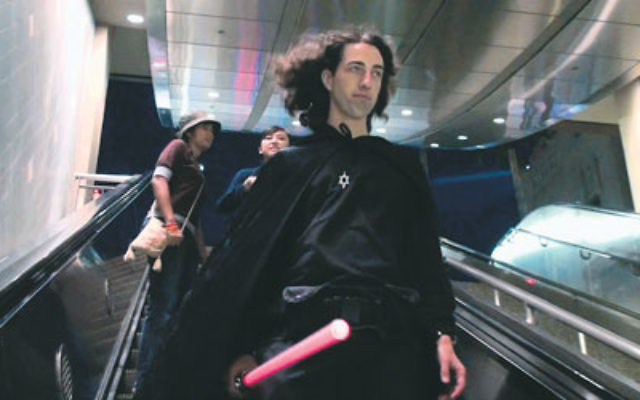 WHEN former Yeshivah College student David Leonard left Melbourne in 2003 to carve out a movie career in Los Angeles, he had stars in his eyes and a dream of making a living doing what he loves.

But Hollywood’s seedy diners, stained casting couches and sticky-floored bars are littered with shattered dreams, and he might have been just another perennially starving artist were it not for his determination to turn life’s lemons into lemonade.

His La La Land odyssey started brightly enough, but before long it had gone horribly pear-shaped. No sooner had he settled into his low-rent apartment in a seamy West Hollywood neighbourhood than it was ransacked and robbed. As he picked up the pieces, serious complications with colitis landed him in hospital for a month.

It was during his convalescence, however, that he came up with the idea to document his recovery from illness and his plan to take on a superhero persona with the intention of avenging the miscreants who had wronged him.

Leonard, who adopted the stage name of David Filmore, produced a feature-length documentary called Hero Man, which he wrote, directed and stars in.

The film has been doing the festival circuit rounds in the United States in the hope it will attract a distributor.

“We sent it to about 30 festivals all around America,” Filmore said by phone from Los Angeles.

“We won an award at the Nevada Film Festival. You send it out and you hope it gets good reactions at the festivals, which creates buzz, and then you look for distribution.”

Filmore sold his car to finance the film, which was shot in Los Angeles, San Diego and West Hollywood on an ultra-low budget of $25,000.

Hero Man follows the adventures of its pale, skeletal protagonist as he consults rabbis, the Jedi council and professional wrestlers on his quest to become a caped crusader.

“We had over a couple of hundred hours of footage and it took me more than a year to edit it, because we had so much good stuff we wanted to put it all in. I got it down to under 90 minutes and I’m still tinkering with it.”

While Filmore has no firm plans to bring Hero Man to Australia, he is hopeful the film will be accepted on the festival circuit later this year.

PHOTO: David Filmore in a scene from his new film, Hero Man.