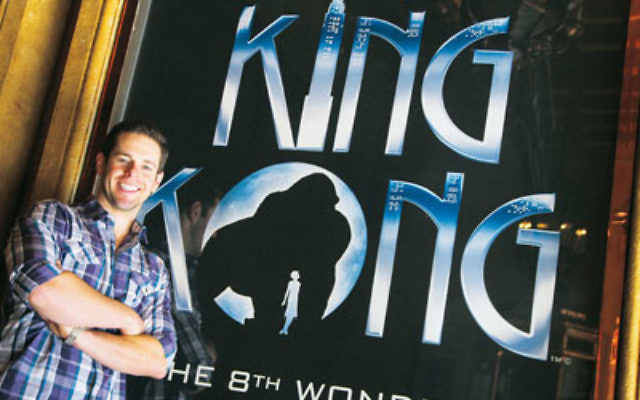 KONG stands six metres tall and weighs more than a tonne, a spectacular star of the new King Kong musical that premieres at Melbourne’s Regent Theatre on June 15.

Kong is a puppet guided by a combination of animatronics and human puppeteers, a multi-million dollar creation of technical wizardry that was five years in development from the team at Global Creatures, responsible for staging the hit arena productions Walking With Dinosaurs and How To Train Your Dragon.

In this musical, Kong has a team of a 11 ­circus artists specially trained in puppetry who operate him on stage, wearing dark outfits but visible to the audience in the style of War Horse and The Lion King.

Jewish performer Josh Feldschuh, one of the team making the moves on Kong, is thrilled to be part of the exciting new musical.

“I am one of the 11 King’s Men on stage who manipulate Kong’s limbs. We are puppeteers who join in the dancing and singing on stage,” he explains.

“We have created his motions and have gone through the scenes, just like an actor learning his lines and positioning. It’s a tightly scripted ­choreography.”

Feldschuh, who combined roller skating and acrobatics in Xanadu – The Musical in Melbourne in 2011 and acted in The Production Company’s musical Kismet later that year, says most of the actors playing the King’s Men have a circus background, while some are dancers and stuntmen.

The King Kong musical is set in 1933 around the story of a Hollywood director, Carl Denham (played by Adam Lyon), who takes his crew on a dangerous journey to remote Skull Island to capture a huge prehistoric creature, Kong. They succeed in bringing the beast back to the United States, where his ultimate escape threatens the destruction of Manhattan.

The drama unfolds against a love affair between actress Ann Darrow (played by Esther Hannaford) and his first mate, Jack Driscoll (Chris Ryan).

The King Kong story is well-known to generations of movie fans, with the first film being released in 1933, followed by low-budget versions until major remakes by Dino de Laurentiis in 1976 and Peter Jackson in 2005.

Everything in the new musical is on a grand scale, from the cast of 49 actors, singers, dancers, puppeteers and circus performers to the 300 metres of electronic cable used in Kong. Deep inside the Regent Theatre is a 30-tonne rig used to control the huge beast.

The musical features new and existing songs from contemporary artists such as Robert Del Naja from Massive Attack, Sarah McLachlan, Justice, Guy Garvey from Elbow and The Avalanches.

Feldschuh started rehearsals for King Kong in January and technical rehearsals in April, but it is not the first time he has gone through a long rehearsal period.

He was in the cast for the London production of Lord of the Rings, which involved a four-month rehearsal followed by a six-week technical check before the show started.

“Since I have been through this process before, I knew what to expect,” he says.

“For King Kong we are lucky that it’s a new show and we could add our own input. There are so many elements that are beyond a normal musical production that makes it so exciting.”

“It’s an extremely complex and intricate production that the ­creative team has been working on for the past five years,” says Feldschuh.

“Because Kong is so big and we are dressed in black, we have the opportunity to hide behind him in certain areas, although we are on stage all the time.

“He is so captivating that within the first few minutes of seeing Kong, the audience will be so drawn to him that they will forget that we are even on stage.

“He is so lifelike that during rehearsals we went up to him and gave him a cuddle.”

Feldschuh says that each King’s Man is responsible for a different part of the giant animal.

“At the moment I am working on the right paw, but that will vary with every performance.”

In addition to being a King’s Man, Feldschuh also has several small ensemble roles.

Feldschuh, who has had a wealth of skating experience since graduating from the Bartuccio School of Dance in Melbourne, says there is limited demand for roller skating in major shows.

“Xanadu and Starlight Express are the only shows that incorporate skating, but I still like hopping on my skates and going for a leisurely ride down St Kilda.”

For now he is looking forward to the world premiere on June 15 and keeping his fingers crossed for a long Melbourne season.

At the same time the show’s producers are hoping that it will end of up on Broadway and the West End.

“With the spectacle of the show, plus the music, it’s a real winner,” says Feldschuh.