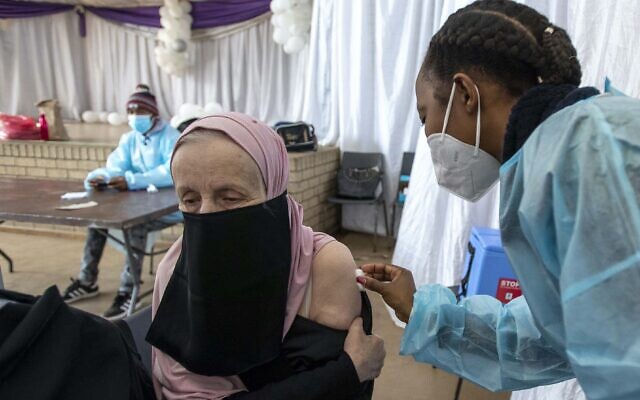 “Mothers bring us into the world and it is really hard to imagine life without them. They are with you when you take your first breath, and you should be able to be with them while they draw their last. Sadly this was not to be for my mom, as like so many recently she died alone.”

These were the words of Zionism Victoria executive director Jean Katzen, who tragically lost her mother to COVID-19 earlier this month in Johannesburg.

Struggling to speak with The AJN about her passing, Jean nonetheless expressed gratitude for the ongoing community support.

Sadly, it’s a familiar story for Marc Almeleh, who has also experienced the frustration and devastation that comes with losing loved ones abroad during this pandemic.

Marc was comforted knowing that while the second wave of COVID raged across South Africa, his parents – both in their 70s – were being careful and following the rules.

After six weeks locked down at home, Marc’s father was required to get some routine blood tests. Days later, he developed symptoms and hoped to get a COVID test but was told he most likely had a kidney infection by doctors who sent him home with antibiotics.

Following a week of persistent symptoms, he was admitted to hospital where he was hit with the news that he had not only tested positive for COVID, but that a close family friend had just lost his battle with the virus. After five weeks of worsening symptoms, unable to breathe by himself, his organs began failing. He passed away at the age of 77.

Marc has now seen two family members and over five family friends fall victim to the virus in South Africa. While he knows he and his family are lucky to be living in Melbourne, he said, “It was a very, very frustrating and stressful experience being so far away, and the doctors were too busy to give you a daily update sometimes.”

Marc’s father, a stalwart of Cape Town’s Sephardi shule, had lost six of his close friends in a six-week period to the disease. “People in Australia just don’t have any idea what is going on in the rest of the world with this,” Marc lamented.

Like Marc, Lynn Mayer knew that relatives in South Africa were very careful; they isolated, they wore masks, they followed the rules.

Days after a picnic, however, a family of five all tested positive. Lynn’s cousin and her three children recovered but her husband, at age 55, with no health conditions, passed away last week.

Watching the funeral online, “was so strange for me … it was such a fast funeral,” she reflected, reporting that she had heard the rabbi say in the background that they had already dug the graves for the following day’s funerals.

Yet, the tragedy continued to unfold. Lynn’s uncle, traumatised by his son-in-law’s death, tripped down a flight of stairs a few days later and also tragically passed away, leaving Lynn to endure another funeral over Zoom on Tuesday. Lynn’s cousin also lost two further members of her extended family to COVID – a mother and father who died within six hours of each other.

In light of the ongoing situation, CEO of the Chevrah Kadisha in Johannesburg Saul Tomson spoke this week with Vic Alhadeff – who consults to the Executive Council of Australian Jewry – reporting that there has been a 35 per cent increase in deaths in the community.

Last Sunday, there were nine Jewish funerals, compared to two or three pre-pandemic.

“It’s a tragic situation,” Tomson said, “exacerbated by the need for financial relief to families who are suffering as a by-product of the pandemic increasing 15 per cent.”

The Chevrah Kadisha, which cares for 1000 residents of old-age homes, has lost a swathe of donations due to increased emigration in response to the situation and is urging expats to dig deep at this difficult time.

South Caulfield Shule’s Rabbi Daniel Rabin, who was born and raised in Johannesburg, told The AJN it has been “really painful” to see the challenges his home country is facing.

“Watching Zoom funeral services has sadly become a regular occurrence,” he said, adding that it had been “particularly confronting to comfort families who cannot travel to be there with loved ones”.

Earlier this week Rabbi Rabin hosted a Zoom interview with Johannesburg lawyer Howard Sackstein, who explained that during the peak of the pandemic, “You could not get a hospital bed,” adding that South Africa has seen over 67,000 deaths so far.

He praised the efforts of Hatzolah, who are currently monitoring almost 1000 people, saying, “They’ll deliver you medication, give you oxygen and a team of doctors will assess you twice a day. They’ll even do your shopping sometimes.”

He also addressed the chaos following the jailing of former president Jacob Zuma. Reflecting on the violence, he said, “Last week was a devastating week for our nation but that doesn’t mean we won’t rise again.”

National President of the Union of Jewish Women South Africa Bev Goldman, meanwhile, is worried that the current unrest will further diminish the community, reporting that the “aliyah department of the South African Zionist Federation has received numerous calls from families wanting to make aliyah because of the situation here”.