ANYONE who follows Mia Freedman on social media knows that it’s more like catching up with a trusted friend than a media tycoon. In her videos, she spins into frame – often shimmering with sequins – in a long skirt or blazer paired with a tee and Converse sneakers. Cool, casual, but also a little bit special.

She chats to the camera, slapping on her makeup, no fuss, with the speed of a mother and business woman in demand. Mia is unbothered by the glistening silver that peeks out from her hairline, instead, she immerses herself in the topics of the day – sharing tips for finding the best fitting bathing suit (that actually makes you feel good), her personal experience with anxiety medication, and the Lady Startups (women-run businesses – but more on that later) that we should all know about.

Yep, Mia is relatable, and she stands out – a refreshingly raw and delightfully imperfect beacon in today’s highly edited and curated social media feeds.

Indeed, it is her brand of honesty that has seen Mia establish a loyal following over the years. On Instagram, the number is 179,000. As for Mamamia, the women’s media company with purpose that Mia co-founded and remains the chief creative, she reaches an audience of more than five million women each month. This also includes the largest women’s podcast network in the world with 36 different shows and over 108 million listens.

When we meet over Zoom, I feel like I’ve somehow crept into one of her Instagram videos. Her dog Bella lies in the background, and a clothing rack heaving with sparkly options sits to the edge of the room. Occasionally she cradles a big bowl of what appears to be cereal – during our afternoon conversation.

“I know that I have a role to play, and if I can make one other woman feel better about herself by posting a photo of my pigmentation, or my stomach, or whatever it happens to be then, that’s a good thing.”

It’s rare in this modern world that people and places are exactly what they seem. But Mia is just that. 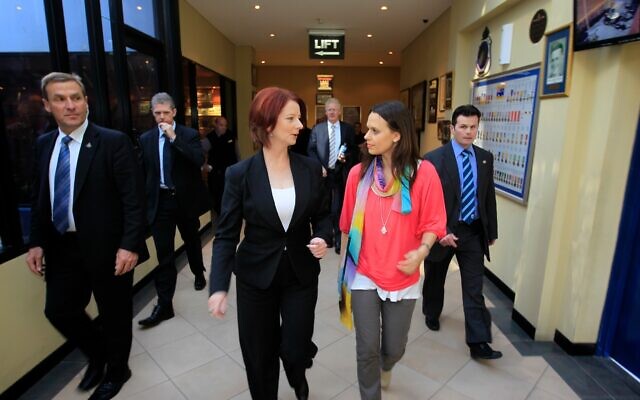 MIA’S upbringing was “very much culturally Jewish”, and she recalls attending Mount Zion preschool in Bondi, and lessons in Torah.

But into her adulthood she learned that while her father was Jewish, her mother was not, and therefore, technically nor was she.

“It was quite a shock,” she tells.

Mia was informed she would need to officially convert.

“It made me quite indignant … I was really offended by it, because then I looked into what it would look like to convert and I assumed it was just a technicality, because I’ve been raised Jewish and I consider myself Jewish, [but then, I was told], ‘No, no, you have to go through all the same steps as anyone who wants to convert from a completely different religion and knows nothing about Judaism.'”

While Mia explored the idea before her first son was born, she says, “It just didn’t feel right – and I wasn’t willing to go through the Orthodox [conversion],” and so it was put on the backburner for some years. But as her son approached bar mitzvah age, Mia realised that unless the situation was addressed, she would not be able to participate in the ceremony quite how she wanted to.

While husband Jason Lavigne belonged to Sydney’s Orthodox Great Synagogue, Mia’s family went to the Progressive congregation, Emanuel. She spoke to the rabbis, and the process began, culminating in “the most beautiful” conversion and mikvah ceremony at Parsley Bay with Rabbi Jacqueline Ninio.

“My three children and I all officially became Jewish, and it was just one of the most special, beautiful days of my life – along with my son’s bar mitzvah and my daughter’s bat mitzvah … Our parents were there, and it was just a beautiful, spiritual thing,” she warmly recalls.

With her youngest son’s bar mitzvah now approaching, Mia says it is a “lovely touch point” where she is again reminded of all the things she loves about Judaism: “my faith, the conversations that I get to have with the rabbis; I love the ritual of it, the tradition and I love the Emanuel ethos and community so much”. 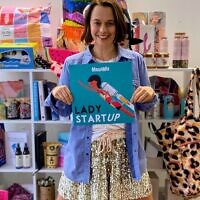 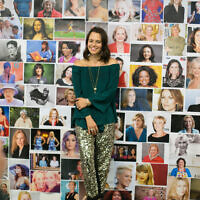 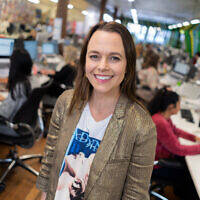 SHARING stories – and information – has remained Mia’s driving force since she began her illustrious career as a work experience teen at Cleo magazine under then-editor, Lisa Wilkinson. Rather than succumbing to the allure of the magazine world itself, she knew the power lay within the platform’s ability to reach women.

“There was no other women’s media,” she tells. “It’s hard to explain it to young women, but back in those days, before social media and streaming services and text messages and Whatsapp groups, if you wanted to know anything about being a woman or a girl, you had to go and find it in a women’s magazine or teenage girls’ magazine.

“Whether it was about sexual health or feminism or beauty things or contraception or relationships or career advice, it was all in these magazines … It just sounds so funny when you can just Google anything you want to find now.”

Musing on the late-term miscarriage she experienced 20 years ago, Mia says, “It was pre-internet mostly, so I couldn’t go and find articles and podcasts and videos and experiences that other women had. I had to go and stand in a bookstore and there was nothing, so I had no way to connect to other people or to find information about this particular subject on demand.”

Mia reflects that it was probably then that the “seeds for Mamamia were planted”.

After her work experience stint at Cleo, Mia carved out a position as a beauty writer and eventually features editor at the title. Her trajectory was swift, and by the age of 24, she became Cosmopolitan‘s youngest editor.

By 2006, having also been the editor of Cleo and Dolly, Mia moved across to PBL Media’s television arm, making her segue into Channel Nine as creative director.

But the job was not what she hoped – and she knew it, deep in the pit of her stomach, just two days into the much-hyped role.

“[I thought] I’ve made such a mistake, and then I thought, maybe I’m just out of my comfort zone? … No, I’ve actually made a really big mistake!”

It took seven months before Mia found the courage to leave.

“I felt like I had no choice. It felt so intolerable, the situation at that time was so toxic. I realised I’d become so unwell with it, with the anxiety of it – I hadn’t been officially diagnosed with anxiety then, but I recognise it now.

“I felt that that toxicity was seeping into my family and I couldn’t quarantine it at work.”

Despite her wanting to get out immediately, Jason steadied Mia, guiding her through redundancy negotiations, ensuring “the buffer to start Mamamia”.

“I had been earning a great salary as a media executive, and now I was earning nothing and working harder than I’d ever worked. I felt like I had no choice, I just knew,” she says.

“I knew when I was in magazines that digital was the future, and I was just sick of trying to convince the men that I worked with, the older men who kept telling me that the internet was a fad and that they were a magazine company.

“I had no business plan, I had no idea of how I was going to make money, I had no investors, I had no degree in anything, let alone any tech experience, but I just couldn’t not do it … I couldn’t. 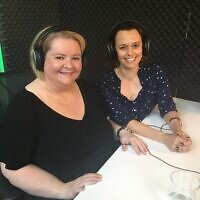 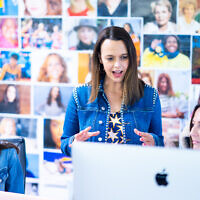 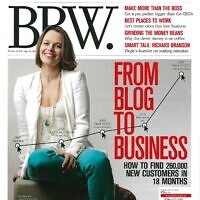 WERE there any doubts?

It’s her intimate knowledge of the challenges involved with taking the leap into her own venture, that inspired Mia to begin Lady Startup, a movement and community that helps support Australian women to pursue their business dreams. There are free resources – a podcast and videos; and a six-week course which teaches women how to level up their side hustle. So far, over 1200 people have participated, forming another multimillion dollar part of her business.

“It came from the desire to help make the world a better place for women and girls … with the three businesses that I’ve launched – Mamamia, the podcast network and the Lady Startup movement – that desire has always come before working out how it can be a business.”

Having led women and written for them for over three decades, Mia recognises imposter syndrome, fear and self-doubt as major limitations that hold women back.

“There is this idea that there’s you, and then there’s everyone else, and that you are the only one who feels self-doubt and insecurity, and everyone else just wakes up in the morning and is like, “I’ve got my sh*t together”, whether it’s as a mother or as a business owner.

“Actually, no one has their sh*t together. No one.

Aside from the internal work required, Mia believes that women have “absorbed society’s very high expectations” for them, citing examples of idealised notions of appearance and parenting techniques.

“Even if you know that that’s not true on a rational level, you’ve absorbed subconsciously over your whole life, and it can be very hard to push back against that.”

She adds, “And it’s unattractive for a woman to be [seen to be] ambitious – that’s something that a lot of women have internalised.”

Reflecting on her 30-year media career, Mia says the “biggest issue” she observed while working in magazines was the way women’s size was portrayed.

“I love magazines, but I hated how insecure they made me feel about myself because none of the women in there looked remotely like me or any woman that I knew.”

She rejoices in a concept of full inclusivity that encompasses size, and more; with skin colour, religion, sexuality, gender, ability and class finally creeping into the evolving conversation.

“In terms of the portrayal of women and women’s lives, the internet has democratised that. It used to be that magazine editors, women like me, were the gatekeepers of the information that would go into that magazine every month – sounds hilarious now, doesn’t it?” she effuses in bemusement.

“Now we’re all the gatekeepers of our own information.”

Mia shares that while she used to be “really anti-selfie culture”, she realised there is nothing more inclusive than a woman having access to a camera and being empowered with the choice of what will happen with her image.

As for Mia’s untouched images that pepper her social feed?

“Part of it is that desire to help other women feel better – and part of it is also laziness, because it takes a lot of work to make an image of yourself that doesn’t exist; whether it’s make-up, using a filter or an app to make yourself skinnier or longer.”