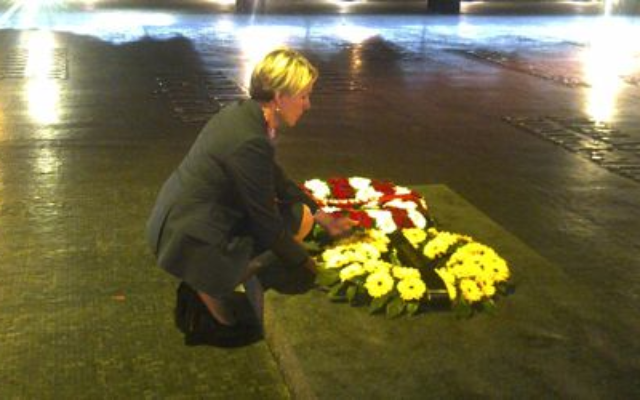 SHADOW foreign affairs spokesperson Tanya Plibersek lamented the lack of progress towards peace after spending two and a half days in Israel and the West Bank.

She told The AJN one of the most memorable moments was visiting Yad Vashem. “Laying a wreath at the Remembrance Hall after a tour of Yad Vashem and the children’s memorial was moving,” she said.

“A political highlight was my visit to the Knesset, and the interesting and influential people I was able to talk with there.”

She said the country remained “as beautiful as I remember it from my first visit [in 2000]”.

“It is a privilege to visit cities, towns and regions with such a long and rich history,” she said. “In my opinion, one of the great strengths of Israel is its diversity, where people from many backgrounds live together in a pluralist, democratic society.”

But she observed: “Politically, my general observation is that Israeli politics has gradually moved towards the right, including the growing strength of settler parties.”

She said living conditions in the West Bank were inferior to what she saw in Israel. “Economic development, including cooperative economic development between Israelis and Palestinians must be a focus now and into the future,” she said.

She said the need for a “negotiated lasting peace has become ever more apparent” since she last visited.

“I am sad there hasn’t been a significant move towards lasting peace,” she said.

“But I continue to be hopeful of a lasting peace through a two-state solution. I met both Israelis and Palestinians with a complete commitment to achieving peace. While there are people who believe in and work for peace, it is possible.”

She added: “It is important that Australia maintains a clear, consistent position in support of a negotiated lasting peace through a two-state solution.”

Plibersek made headlines in 2002 when she labelled Israel a “rogue state” and then prime minister Ariel Sharon a “war criminal”.

In a 2011 interview she said she had “spoken injudiciously” and declared her support for a two-state solution.