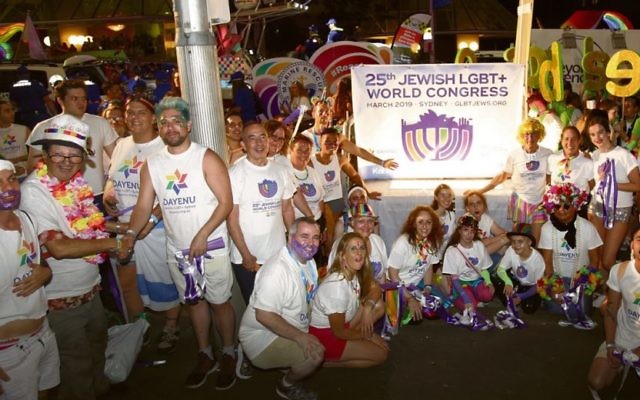 Members of Dayenu and the Jewish LGBT+ World Congress at the recent 2019 Sydney Gay and Lesbian Mardi Gras.

GET ready to learn, discover, pray and, of course, party … because the 25th Jewish LGBT+ World Congress is coming to Sydney from March 21-24 – and you are invited!

Event convenor, Dayenu’s Kim Gotlieb, said the program for this landmark conference – the first of its kind to be held in the Asia-Pacific region – is “absolutely exceptional”.

He emphasised it will offer abundant opportunities for everyone – regardless of their religious affiliation, sexual orientation or gender identity – to learn about pressing local and international LGBT+ issues, challenges and achievements.

And he said the conference will also open doors to start new and fascinating discussions, embrace diversity within the Jewish community, and hear stories and insights from more than 20 inspiring guest speakers from around the world.

“This is truly an amazing chance for people to come together, gain knowledge and understanding, share conversations, help make the world a better place, and of course have lots of fun too,” Gotlieb said.

“The program offers a strong global perspective on LGBT+ matters of interest to Jewish communities – from human rights to antisemitism – with presenters from many countries including Mexico, Israel and France.”

Jewish LGBT+ people are a minority within a minority in Australia, so Gotlieb said another benefit of hosting an event of this scale is to shine a light on this vibrant community sector, while fostering networking and bridge-building opportunities to advance inclusiveness.

“Recently someone aptly said to me ‘When I’m in lesbian circles I avoid talking about being Jewish, and when I’m in Jewish communities I don’t say much about being lesbian – so where can I just be me?'” Gotlieb recalled.

“Many people in this intersection of Jewish and LGBT+ identities can fall through the net.

This event will help bring people together, and show that LGBT+ Jews are not a group that is ‘over there’ anymore.”

The conference’s official launch on opening night (6.30pm on Thursday, March 21) at Emanuel Synagogue’s gallery will include a razzle-dazzle performance of The Queerest Gender-Bending Purim Shpiel Play on the Planet, starring most members of the organising committee.

It will also feature the Australian book launch of Kol Koleinu, a 2018 Jewish LGBT+ World Congress publication – produced by its current president Frank Giaoui – exploring the history and work of major Jewish LGBT+ organisations in 15 countries.

The first daytime session on March 21 starts with a Jewish LGBT+ World Congress board meeting at the shule at 9am, followed by a ‘queer tour’ of the Sydney Jewish Museum, and a visit to the Gay and Lesbian Holocaust Memorial across the road at Green Park.

“Many people in Sydney’s Jewish community are not even aware that this important memorial exists,” Gotlieb said.

“The Pride service will be a fantastic, inclusive traditional Shabbat service, but with a musical and Queer Eye twist, that is open to absolutely everybody to experience,” Gotlieb said.

“I know it will have many beautiful moments, particularly when Abby Stein, who once was a Chassidic rabbi in New York, helps lead the service as a transitioned woman and a Jewish transgender icon.”

A range of seminars continue on Saturday – plus inclusive Shabbat services – followed by the conference’s Keynote Speaker Sessions, which will be a huge drawcard.

Independent Wentworth MP Kerryn Phelps – the first Jewish lesbian elected to federal parliament – will take to the microphone at Emanuel Synagogue’s new sanctuary at 2.30pm, while Abby Stein will tell her own fascinating life journey from 7pm.

In between, at 4.15pm, there will be a four-member panel discussion about generational narratives and their influence on the experience of being Jewish and LGBT+.

“We recognised that our Bay Area [in San Francisco] is becoming younger, less religious and more diverse – and felt a call to action to create a synagogue that is as meaningful for the new families and neighbours around us as it was for our founding members.”

Another fascinating speaker at Congress events will be Rabbi Elli Tikvah Sarah from Brighton and Hove Progressive Synagogue, who in 1989 became one of the first ‘out’ lesbians to be ordained in the UK.

Speaking to The AJN, Rabbi Sarah recalled the stress she was under when being on probation for five years of rabbinic training rather than the usual one year, and then being confronted with homophobia in the early years of her rabbinate.

“I adopted ‘Tikva’ (hope) as my middle name as an act of defiance, and what gives me most hope for the future is how far we have come since that time,” she said, in making Jewish life “more egalitarian and inclusive”.

“When I started on my journey 35 years ago, I felt excluded and marginalised as a lesbian and as a female.

“I was determined to change that – both for myself and for other LGBT+ Jews – and it is wonderful to know that after 30 years as a rabbi, I have played a part in a transformation.

“My main message at the Congress will be: here we are as LGBT+ Jews.”

For more information about the 2019 Jewish LGBT+ World Congress in Sydney, including the full program and how to book tickets, visit dayenu.org.au