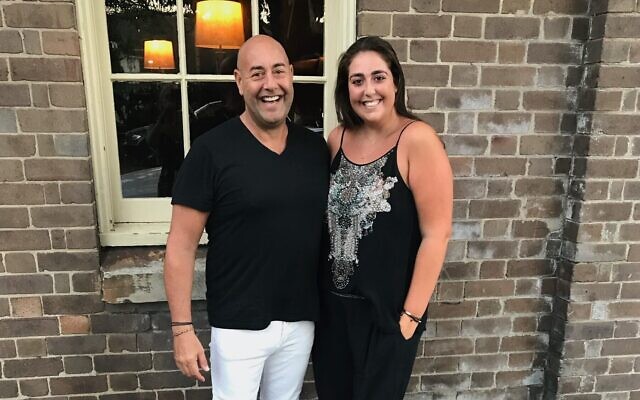 A PROMINENT Jewish GP in Rose Bay has told The AJN, “Value your life,” after he was struck down with COVID-19 and placed in intensive care.

The doctor – who was photographed on the front page of The Sydney Morning Herald on Wednesday in ICU at St Vincent’s Hospital – is currently among 71 COVID cases admitted to hospital, with 20 people in intensive care, four of whom require ventilation.

It comes as a Jewish father and daughter from Sydney’s east – who revealed this week that they were both diagnosed with COVID-19 – issue a warning to the Jewish community about the dangers of the highly contagious Delta strain.

Speaking to The AJN on Wednesday, real estate agent Alain Waitsman, who contracted COVID from his 25-year-old daughter Claudia after she visited Joh Bailey hair salon in Double Bay last month, said the community needs to “realise how easily this virus is spreading”.

“The Jewish community is a tight community and we all want to see our parents and family on Friday night. But we just can’t do it,” Alain told The AJN.

Stressing, “Anyone who can get vaccinated should get vaccinated because that’s what saved me getting sick,” Alain said he had received his first dose of the Pfizer vaccine before being identified as a close contact and returning a positive result.

“I had my first vaccination and it certainly helped. I was basically asymptomatic. My daughter copped it a little worse than I did.”

Claudia told media that four days after her appointment, she learnt the hairdresser was an exposure venue and immediately went into self-isolation.

“Wednesday night I had a headache but there were no symptoms other than that. On the Saturday, I woke up with body aches and I went and got tested. That’s when it came back positive,” she said.

“I couldn’t believe it was me. I was very shocked.”

Alain added, “This virus travels under doors, between cracks, it seems to go everywhere. It’s a serious thing and we’ve got to clear it up in Sydney.”

On Wednesday morning, the state government announced that given the ongoing number of cases in the community – which was nearing the 900 mark since the outbreak in Bondi began last month – the current lockdown would be extended until at least Friday, July 30.

School students, who have been spending the first four days of term 3 working from home, will continue remote learning for an additional two weeks.

Meanwhile, residents in Bondi Junction were put on alert with an apartment complex in Botany Street, consisting of 29 units, put into lockdown after nine cases of COVID had been identified across five different households in the building.

Several venues in Bondi Junction, including Blooms the Chemist in Eastgate, Woolworths in Westfield and a number of stores on Oxford Street, were listed as exposure sites.

Across the bridge, St Ives Shopping Village, which attracts many Jewish visitors, was also listed by NSW Health.

For a full list of exposure sites, visit www.health.nsw.gov.au.