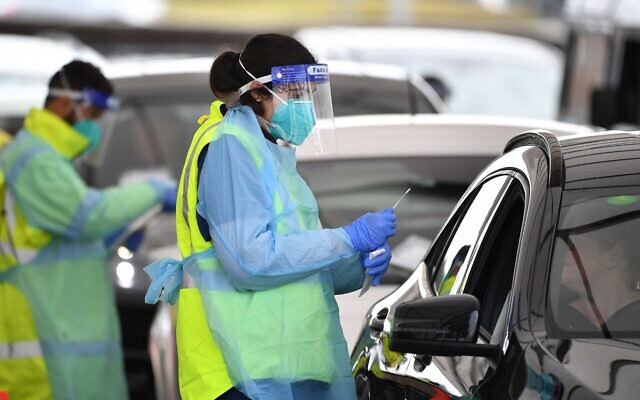 AS the NSW government set out new restrictions that will impact shule services, weddings and funerals, the granddaughter of a Jewish man from Bondi has slammed health authorities for waiting three days to tell residents of his apartment block that they may have come into contact with COVID-19 from an infected couple.

It comes as The AJN reveals that a Moriah College parent who tested positive unknowingly came within 60 centimetres of an infected limousine driver at Myer in Bondi Junction on June 12, with authorities saying the encounter is a reminder of just how infectious the Delta strain is.

On Tuesday night, it emerged that the family members of the Moriah parent – a man in his 50s – had also tested positive for COVID.

On Wednesday morning, NSW Health revealed five of the man’s family members had the virus.

“NSW Health has confirmed there are no implications for Moriah as the family members were in isolation while infectious,” Moriah principal Rabbi Yehoshua Smukler said.

“At this point in time, all in-school programs and music camp will continue as planned.”

Rabbi Smukler told parents about the Moriah father’s diagnosis on Friday morning, stating, “All of the family members have tested negative,” and that NSW Health “confirmed that there was no direct exposure” to the school.

The AJN understands the man caught COVID while shopping at Myer and coming “somewhere in the range of between 10 and ­possibly 50-60 centimetres away” from the limousine driver who started the latest outbreak.

“Each of them had stood not far away from each other for a very short period of time and then it would appear that one of them possibly moved through the airspace that the other one had occupied,” NSW Health Minister Brad Hazzard said.

Meanwhile, as The AJN first reported on Sunday, residents of a Bondi apartment block, including a number of elderly people, were left in the dark for three days about a couple in their building having confirmed cases of COVID.

Last Wednesday, NSW Health revealed a man in his 60s and his wife had tested positive for the virus.

However, residents in the couple’s block had no idea about the COVID cases in their building until Saturday night when a notice from South Eastern Sydney Local Health District (SESLHD) was placed in the hallway.

The notice was put up after the granddaughter of one of the residents phoned the health department to alert them to the fact some residents were not aware of the COVID patients living in the building.

The AJN has obtained a copy of the notice, dated June 19, which advises that “a person with confirmed COVID-19 infection has recently been in common areas” of the building.

“To our knowledge, the person did not come into direct contact with occupants of the building, however out of an abundance of caution we would like you to be aware that you may have had passing contact with COVID-19,” the notice states.

“We recommend that you get a test at a local COVID testing clinic and please monitor your health for the next two weeks.”

The notice also contains a handwritten note stating that all surfaces in the hallway had been sanitised at 5pm on Saturday night.

The AJN understands that a nurse from NSW Health rang a man – whose elderly mother lives in the same block – “and asked that he organise deep cleaning” because he is the building’s strata body chairman.

“He couldn’t organise that on a Saturday night easily so he did it himself as there are a lot of elderly there,” a source told The AJN.

“He cleaned and sanitised the foyer wearing gloves … He’s had to have a COVID test and is extremely worried about his mum.”

The AJN also understands that NSW Health phoned the granddaughter of one resident on Sunday to inform her that her grandfather should get tested.

She told The AJN, “I am disgusted and appalled that more wasn’t done to protect the vulnerable in the building.”

The AJN approached Hazzard for comment on Monday, but had not received a response by press time on Wednesday.

Shadow health minister Ryan Park, however, told The AJN, “The government must do better to ensure that close contacts are kept informed and that all of the necessary information about how to reduce the transmission is provided to them.”

A spokesperson for SESLHD did not answer The AJN’s questions about why residents in the block were not informed about the COVID cases sooner.

Meanwhile, the state government on Wednesday announced restrictions that would be in place for seven days. Among the regulations are a ban on singing by congregants at places of worship, a return to the one person per four square metre rule at weddings and funerals, and dancing at weddings restricted to the bridal party, capped at 20 people.