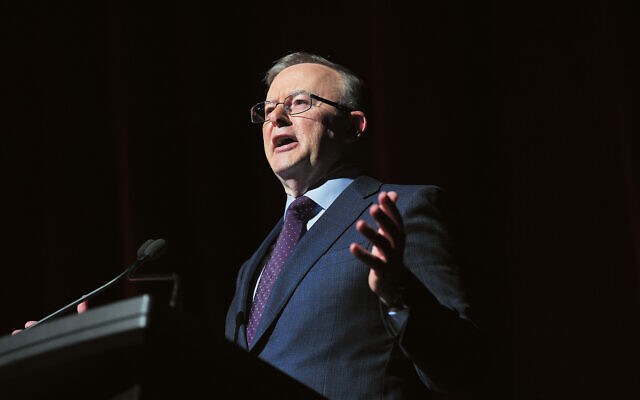 OPPOSITION leader Anthony Albanese vehemently condemned antisemitism, boycotts of Israel and the apartheid slur, but failed to provide clarity on whether Labor would recognise a Palestinian state if elected to government during an online forum with Jewish communal leaders this week.

In the Tuesday evening Zoom hosted by the Executive Council of Australian Jewry (ECAJ) co-CEO Peter Wertheim, the federal Labor leader reiterated his support for a two-state solution, saying he has always been “very concerned” by people who argue for a one-state solution, calling it “a recipe for disaster”.

Recognising that Israel was created as a Jewish state, Albanese said, “To pretend that wasn’t the case is ahistorical.”

But while clear on that point, he was less so when asked whether Labor would recognise a Palestinian state should it win the next election – as its party platform now calls for it to do – also stating that it would be “pre-emptive” to confirm which Palestinian authority it would recognise.

“We wouldn’t take any action without consulting relevant organisations and nations, across the board, including the Jewish community, including Israel and the Palestinian community,” he said.

When Wertheim pointed out Israel’s peace offers of 2001 and 2008, which were rejected by the Palestinian Authority, Albanese agreed, “It is a tragedy that those opportunities have been lost.”

Addressing the recent Israel–Hamas conflict, Albanese called the indiscriminate firing of rockets into Israel “counterproductive” as it “undermines peace and endangers lives”, but also criticised “some of the actions of Israel as well in responding aggressively”.

He said he wouldn’t shy from criticising Israel, which he did at points in the interview, mentioning that he had been critical of the “annexation of the West Bank” and actions taken in East Jerusalem. However, he did not mention Hamas, its terrorist status or its many atrocities outside of rockets.

Asked about a Queensland Labor conference resolution earlier this year accusing Israel of “ethnic cleansing” and “apartheid”, Albanese said he endorsed shadow foreign minister Penny Wong’s condemnation of the resolution, in which she said blaming one side “will not advance the cause for peace”.

The Labor leader was strong in his view on the use of the word “apartheid”, stating the term “not only is not appropriate for describing the Israeli political system and structure, it also, I think, cheapens the struggle against apartheid that occurred in South Africa”.

He also addressed a motion endorsing a boycott of Israel that is to be put to the NSW conference in September with the backing of Bob Carr.

“Not a single member of my caucus supports that motion; not one,” he said, stating that he couldn’t see “any prospect in which it got to the floor of a conference”, adding that it would be “totally counterproductive”.

“There is no support for it from any significant figures who hold current positions in the Labor Party,” he added.

In 2011, Albanese led the campaign against Marrickville Council in Sydney’s decision to boycott Israel, naming it “costly, clumsy and unproductive”. He raised these past efforts and pledged “an ongoing opposition to BDS”.

He condemned the rise in antisemitism generally, saying he is “deeply concerned” about its re-emergence, also acknowledging the surge of antisemitism from the extreme left.

He added that he is “very, very supportive” of specifically identifying antisemitism, like other forms of racism, and that antisemitism “should be talked about and should be taught [about]” and said a Labor government would endorse the International Holocaust Remembrance Alliance (IHRA) definition of antisemitism.

The AJN asked whether a future Labor government would consider establishing an independent external complaints mechanism for the ABC, to which Albanese said, “There is a range of mechanisms in which the ABC is accountable already, I don’t know that I’d want funding diverted into more bureaucracy.

“The ABC should always try to be balanced but I’m not going to add to the pile on on the ABC,” he said, adding that he believes the broadcaster is “underfunded”.

More than 70 members of the community – including representatives from many Jewish organisations – watched the interview.

Meanwhile, the Zionist Federation of Australia (ZFA) also held a meeting with the opposition leader on Sunday.

The meeting was the result of similar meetings with deputy opposition leader Richard Marles and Labor foreign affairs spokesperson Penny Wong in the last fortnight.

Describing it as a “constructive discussion”, ZFA president Jeremy Leibler told The AJN, “Mr Albanese displayed a genuine concern about the rise of hatred the Jewish community has been facing and unequivocally condemned the rising tide of antisemitism we are witnessing across the globe and in Australia.”