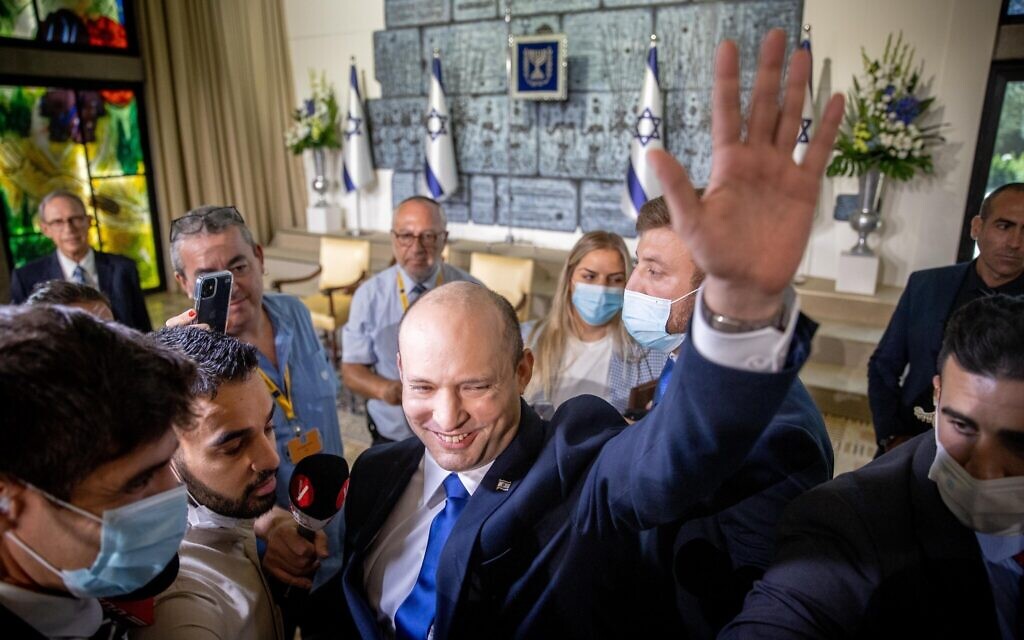 In a history-making vote, Israel’s 36th government was sworn in at the Knesset on Sunday, installing Yamina chair Naftali Bennett as prime minister and ousting Benjamin Netanyahu after 12 years of consecutive rule as premier.

With just a plurality of the 120 seat Knesset, MKs voted 60-59 in favour of the new government, made up of right-wing, left-wing, centrist, and Islamist parties that came together to oust Netanyahu and end two years of political deadlock. One MK, Ra’am’s Saeed al-Harumi, abstained from the vote.

Immediately following the confidence vote, members of Netanyahu’s government vacated the seats on the government table in the Knesset plenum, with Netanyahu leaving the prime minister’s chair.

Passing Bennett, the now-former prime minister shook his successor’s hand in a symbol of the peaceful transition of power.

Bennett was then sworn in as prime minister, followed by his new government colleagues. His election represents the first time that Israel has been led by a religiously observant, kippa-wearing prime minister. He is also the leader of the smallest faction ever to appoint a prime minister, as his Yamina has a mere seven MKs, one of whom, MK Amichai Chikli, voted against the new government. 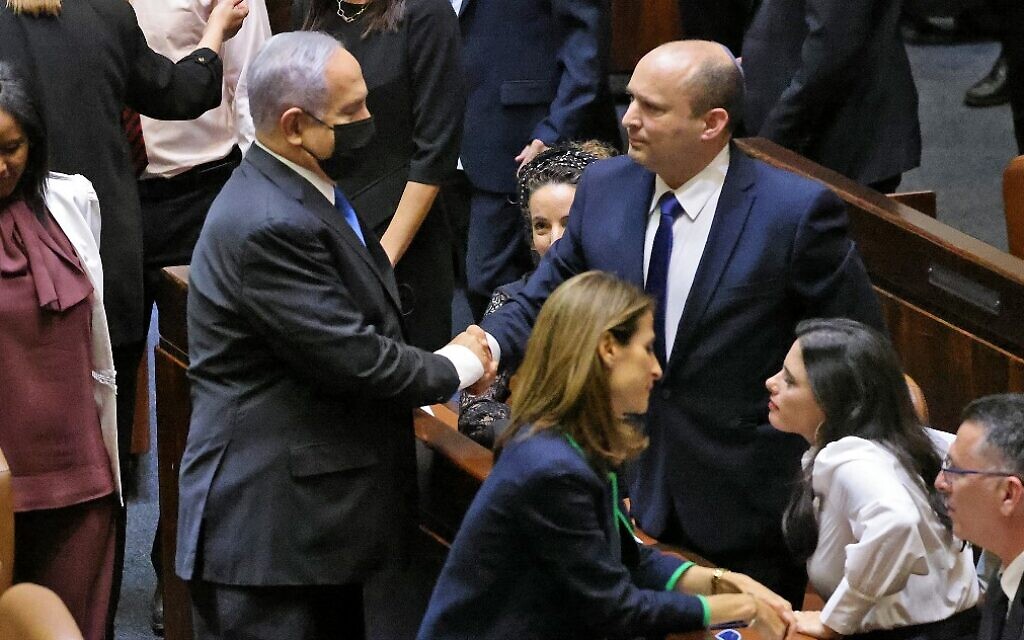 Bennett, 49, is also Israel’s second-youngest prime minister — the record for youngest stays with Netanyahu, who was just 46 the first time he assumed the role in 1996.

Yesh Atid chairman Yair Lapid, who put together the coalition after being tasked by outgoing President Reuven Rivlin with doing so, was sworn in as “alternate prime minister and future prime minister,” as well as foreign minister. Referring to the coalition agreements between the two, Bennett promised from the podium to hand over the premiership to Lapid on August 27, 2023.

After Bennett and Lapid, the new ministers were sworn in one by one, before taking their places at the government table. In all, 28 ministers were being sworn in, including a record nine women.

The new cabinet, which will also have six deputy ministers, is the third-largest in Israel’s history, second only to the outgoing government (35 cabinet ministers) and Netanyahu’s 2009-2013 government (30 ministers).

Before the vote of confidence in the government, Yesh Atid MK Mickey Levy was elected to replace Likud’s Yariv Levin as Knesset speaker, with 67 votes to 52. 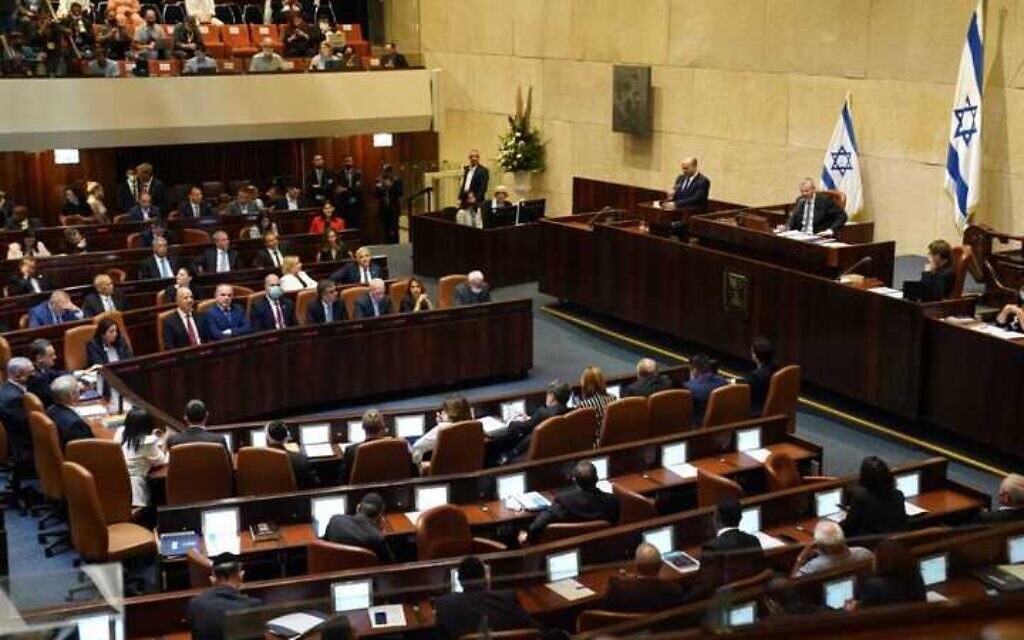 The government is backed by eight of the 13 parties that won seats in the March 23 election, for a total of 60 votes in the 120-member Knesset: Yesh Atid (17 seats), Blue and White (8), Yisrael Beytenu (7), Labor (7), Yamina (6 of its 7 MKs), New Hope (6), Meretz (6) and Ra’am (3 of its 4 MKs, with the fourth, al-Harumi). The parties shunted to the opposition are: Netanyahu’s Likud, the ultra-Orthodox Shas and United Torah Judaism parties, the far-right Religious Zionism, and the predominantly Arab Joint List.

The coalition represents an unprecedentedly diverse mix of parties, from right (Yamina, New Hope and Yisrael Beytenu) to center (Yesh Atid and Blue and White), to left (Labor and Meretz), in addition to the conservative Islamist Party Ra’am. Their leaders have vowed to try to work via consensus to heal rifts in Israeli society without crossing their own ideological red lines.

Speaking before the confidence vote in a speech repeatedly interrupted by the new opposition members, Bennett presented his new “reasonable and responsible” government, pledging that it would “end a terrible period of hatred among the people of Israel.”

As members of Netanyahu’s party shouted at Bennett that he was “a criminal” and a “liar,” Bennett said Likud MKs were providing proof of the urgent need to bring back decency and unity to Israeli politics.

He said the new government would work “for all the citizens of Israel” and bring an end to a cycle of elections and divisiveness. Israel has held four national elections since April 2019, which until now had yielded just one government: the short-lived power-sharing coalition last year of Likud and Benny Gantz’s centrist Blue and White. 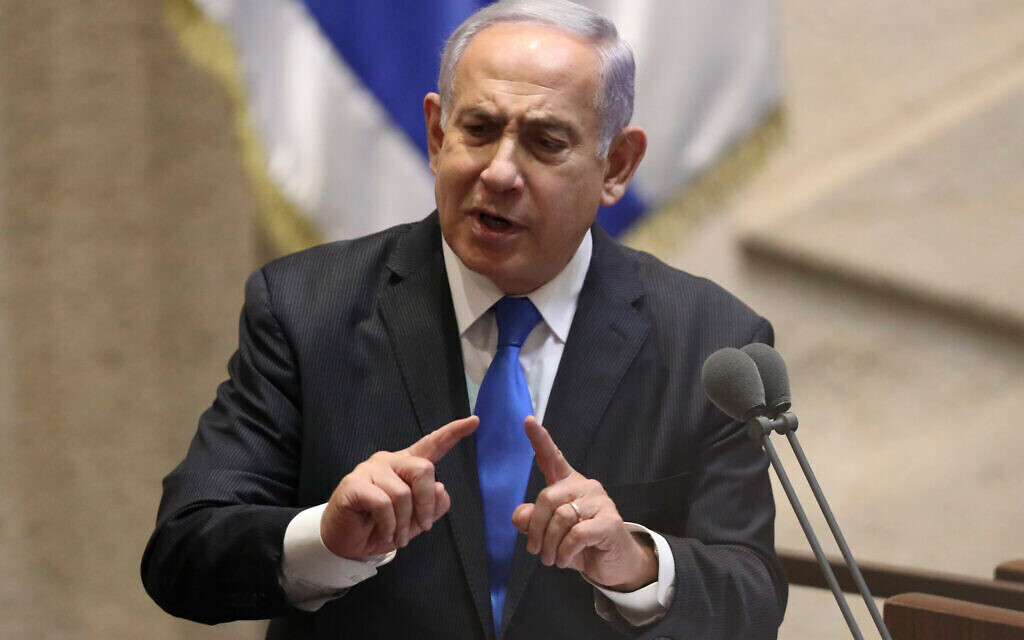 In his final speech as prime minister of Israel before the new government was sworn in, Netanyahu unleashed his fury on Bennett and vowed to work tirelessly to topple the new coalition.

“I will fight daily against this terrible, dangerous left-wing government in order to topple it,” Netanyahu said at the conclusion of a lengthy speech in the Knesset plenum. “With God’s help, it will happen a lot earlier than you think it will.”

In comments warning Iran, Hamas and Hezbollah that he is not going anywhere, he declared in English: “We’ll be back soon!”

Netanyahu’s downfall comes amid an ongoing criminal trial in which he has been indicted for bribery fraud and breach of trust, charges which he denies.

Despite declarations by most of the parties in the new coalition that they would not side with him, Netanyahu had been trying to woo defectors from the ranks of some of those parties in recent days, without success.

On his way to the vote, Netanyahu told reporters that it was “a very sad evening for millions of Israelis.”

Following the swearing-in ceremony, members of the newly installed government headed to the President’s Residence for the traditional group photograph of ministers with outgoing President Reuven Rivlin, who will end his seven-year term on July 9.