THERE are fears of full-scale war  as rockets rain from Gaza, mobs burn synagogues inside Israel, Jews and Arabs attack each other in the streets and the IDF retaliate with air strikes against Hamas targets.

What began with rioting in Jerusalem last week has now escalated with Israel on the brink of its first major conflict since 2014. As of Thursday morning (AEST), seven Israelis – including a five-year-old boy and a seven-year-old girl – had been killed and scores injured as more than 1000 rockets were fired at Israel between Monday and Wednesday.

A state of emergency was declared in the city of Lod, whose mayor decried widespread and violent rioting by Arab mobs as “civil war” as synagogues, cars and shops burned. Arab unrest also spilled on to the streets of Ramle. Meanwhile, there were reports of Jews attacking Arabs in Jerusalem and Bat Yam.

“I don’t care if your blood is boiling. So it’s boiling. It’s irrelevant. You can’t take the law into your own hands. You can’t come to an Arab civilian and try to lynch him, just as we can’t see Arab citizens do so to Jewish citizens. This will not stand.”

Ongoing rocket attacks from Gaza on Israeli civilian populations are simply indefensible.
Israel has a clear right to respond, as would any nation under such attack.
I urge Hamas to cease its rocket fire so no further civilian casualties result, in both Gaza and Israel. https://t.co/Uj1rDzqkUR

On Wednesday, the IDF said it had attacked “a number of significant terror sites and terrorists across the Gaza Strip”, with 18 Hamas terrorists killed. The Hamas-run Gaza health ministry said Israeli airstrikes had killed 32 people and injured 220.

“Labor calls on all sides to de-escalate.”

Deeply saddened by the violence and loss of life we have seen these past few days. The acts of violence and terrorism, including rocket attacks on civilians, must cease. We urge all parties to do all they can to calm tensions. See #smarttraveller for our travel advice.

Addressing the Jerusalem unrest that preceded the escalation, Executive Council of Australian Jewry co-CEO Alex Ryvchin said, “We are appalled by the carefully orchestrated violence in Jerusalem which included the stockpiling of slabs of stones in a holy place and a persistent campaign of incitement to racist violence using the myth that the Al-Aqsa Mosque was in danger of Jewish desecration.”

He said the Hamas rockets constitute “a dangerous escalation by Hamas for which they will inevitably suffer”.

“We mourn the loss of innocent life and stand in solidarity with the people of Israel who are once again living through the terror of bomb shelters, sirens and devastating loss of life and property,” he added.

“To end this violence it is essential for governments, human rights organisations and the UN to be crystal clear in directing their condemnation at the terrorists in Gaza and calling for an immediate end to their crimes.”

On ABC News just now discussing the situation in Israel.

“Hamas has both orchestrated clashes in Jerusalem’s holy sites during Ramadan and cynically seized on the potential eviction of some Palestinian residents of Sheikh Jarrah as the result of the outcome of a long-standing private court case over land ownership as pretexts to start a round of violence,” he said.

“However, as always, the underlying causes are this terror group’s refusal to accept Israel’s right to exist, and willingness to not only target Israeli civilians, but cynically put the lives of Gaza’s civilians in danger to score political points.”

AIJAC executive director Colin Rubenstein expressed sympathy “to all those affected by Hamas’s indefensible actions, both Israeli and Palestinian”.

“We call on the entire international community to condemn both the Hamas attacks and demand they cease, together with the incitement from Fatah and Hamas that preceded and continues to stoke the violence in Jerusalem,” he said.

An update from Amb. @JonathanPeled regarding the terror attacks from Gaza. pic.twitter.com/kvoiZxTnCq

The Zionist Federation of Australia (ZFA) said it fully supports Israel’s “right and duty” to protect its citizens.

“Each of the hundreds of Palestinian rockets fired from Gaza and aimed at Israeli civilians is a war crime. Throwing paving stones at worshippers in the Western Wall plaza from the Temple Mount is indefensible,” ZFA president Jeremy Leibler said.

“The incitement by Hamas and the PA to violent attacks on Israeli citizens is completely unacceptable and must be called out for what it is – terrorism.”

With Australian participants currently in Israel on gap-year programs, ZFA CEO Ginette Searle added that the roof body was closely monitoring the situation.

“Masa ensures the welfare and safety of participants is its top priority. We understand that Masa officials in Israel are in touch with Masa participants,” she said.

A shameful and morally bankrupt statement. Classic example of victim blaming while Israelis sleep in bomb shelters. The notional condemnation of rocket attacks is hollow. The suggestion that Hamas are firing rockets due to Sheikh Jarrah is at best naive and at worst disingenuous. https://t.co/TFg8eWryJ5

Despite communal roof bodies squarely laying the blame at the feet of Hamas and the Palestinian Authority, the New Israel Fund (NIF) pointed the finger at the Jewish State. NIF Australia executive director Liam Getreu said the situation “hasn’t come out of the blue”.

Referencing Sheikh Jarrah, he claimed, “Despite attempts to frame this struggle as a real estate dispute, the reality is that it’s a story of injustice and discrimination.

“That inequality has once again brought about a rekindling of the wider conflict which has already taken the lives of innocent people, including children, inside Gaza and in Israel.”

Condemning Getreu’s statement as “shameful and morally bankrupt” and a “classic example of victim blaming”, Jeremy Leibler said, “The suggestion that Hamas are firing rockets due to Sheikh Jarrah is at best naive and at worst disingenuous.”

Meanwhile, members of the community are invited to join Melbourne’s South Caulfield Shule and Sydney’s Bondi Mizrachi Synagogue tonight (Thursday) as the community unites in solidarity and prayer for Israel.

Further coverage in this week’s AJN. 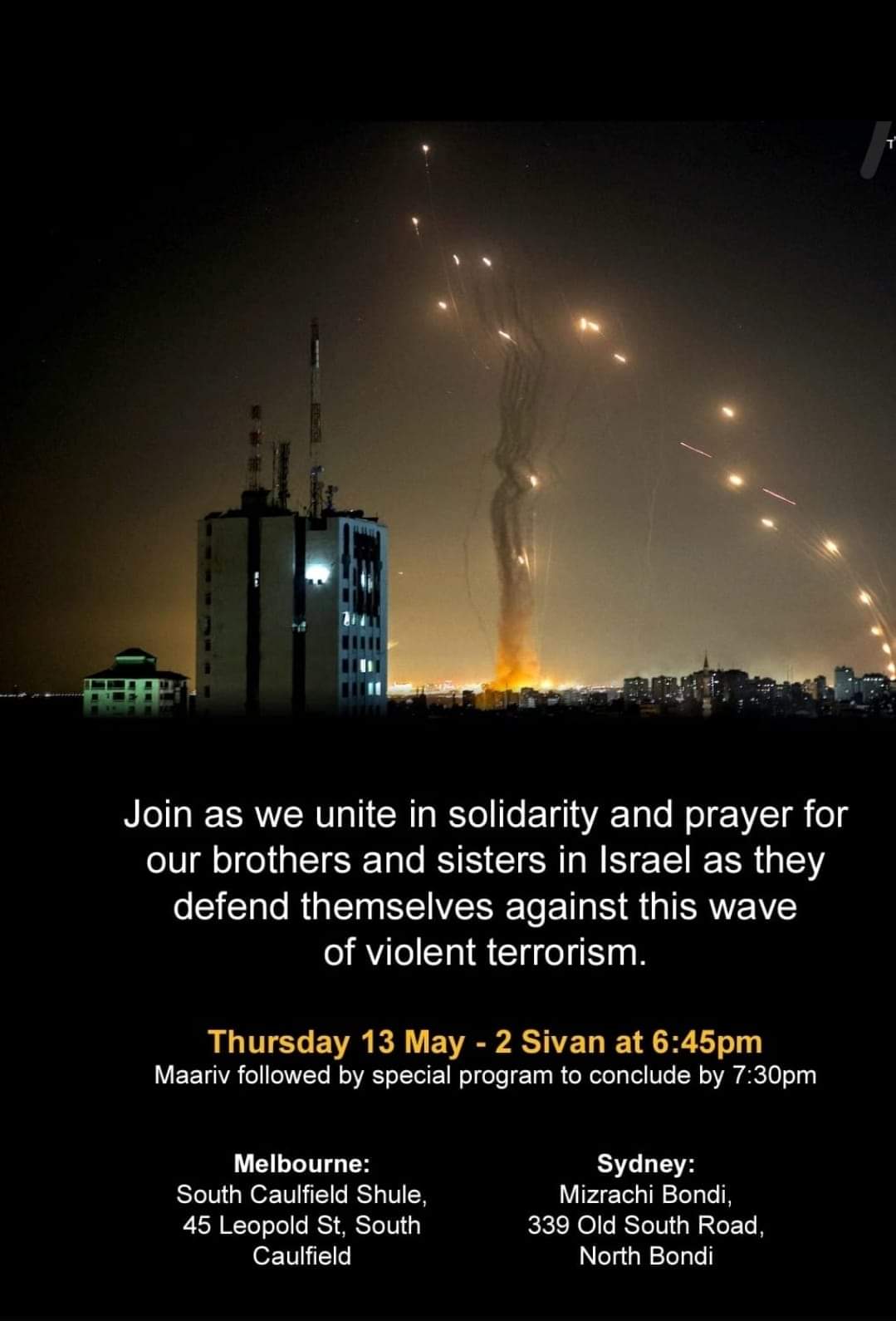