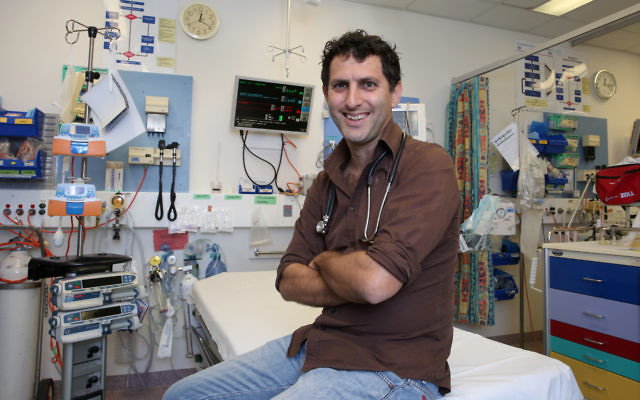 Israeli Doctor Saar Hashavya pictured in the emergency department of The Sydney Children’s Hospital in Randwick.

DOCTOR Saar Hashavya, from Jerusalem’s Hadassah Hospital, will next month complete a year-long fellowship in paediatric emergency medicine at the Sydney Children’s Hospital. He shares his reflections on the experience with Phoebe Roth.

In Israel, if you’re ill or have been injured, as a general rule you will be assessed in the emergency department (ED), and then be seen to by the relevant subspecialty.

“Here [in Australia] it’s a bit different. Because here the ED physicians are seeing everything.”

As this approach becomes more widely implemented in Israeli hospitals, the expertise Hashavya gains from his Australian posting will be invaluable.

His fellowship has been made possible by funding from a family foundation, administered through AUSiMED (Australia–Israel Medical Research), an organisation which supports medical research initiatives that benefit Australia, Israel and the global community.

“AUSiMED is the neutral intermediary that can cost effectively link the Australian institution and the Israeli institution by channelling funds that we’re able to raise on a fully tax-deductible basis,” explains Ron Finkel, president of AUSiMED.

Finkel – who is also the president of Hadassah Australia, but notes that AUSiMED is not linked to any one institution – says these sorts of exchanges respond to identified gaps in some aspect of health care in Australia or Israel.

“In most cases that [AUSiMED] are involved with, we are funding to address a need that’s been identified and a gap that needs filling,” Finkel says.

“It’s not just for the individual’s pleasure for their coming on an overseas jaunt to advance their personal careers. The drivers are always the institutions involved who have identified, endorsed and requested support for a fellowship to meet a gap.”

Indeed, Hashavya notes that there is a shortage of emergency medicine doctors in Israel. Since arriving in August last year, he has learnt skills in an array of specialties, but says this is only the beginning of what he has gained.

“I think that the more comprehensive work in the ED, meaning the teamwork, meaning the patient flow, is more important to bring back, rather than the manual skills,” he says.

“The teamwork and the higher level of organisation in the ED is something which I like here very much and which I think should be implemented in Israel in Hadassah.”

“In the case of research fellowships, the opportunities are many and varied,” says Finkel.

Ta-Shma, a paediatric cardiologist, specialises in foetal heart defects, and in Melbourne is following genetic defects in chicken models.

“This particular power of one plus one is probably going to give six as an outcome, not just two as an outcome,” enthuses Finkel.

He is similarly enthusiastic about the contribution Hashavya is making. “From what I’ve understood he’s made a really good contribution to [Sydney Children’s Hospital] over the past year … he’s been a very positive face of Israel in the hospital context,” Finkel says.

While the last 11 months have provided an unparalleled learning experience for the young doctor, he believes there has been a sharing of knowledge as well.

“I think at the end it’s a dialogue rather than a monologue,” Hashavya says. “It’s interesting for the other team members over here to look at the different flavours, and to see how things are done differently maybe in other parts of the world, for example Israel.

“It’s the connection with the medical team here that is even more important.

Because it’s a relationship that will thrive even later, even after I leave. I think that’s even more important than just the training by itself.”

Hashavya says he is grateful to AUSiMED, their generous donors, and the Sydney Jewish community at large. His family is living in Maroubra and his children have been attending Mount Sinai College.

“There was not one holiday that we weren’t invited to somebody’s house. It was really heartwarming.”

Having worked at Hadassah Hospital since he first qualified as a doctor, Hashavya has much to say about the world-renowned institution.

“Hadassah is taking care of all the population in Jerusalem. Which means Muslims, ultra-Orthodox Jews, secular Jews, Christians … it’s a very multicultural experience. And I think it’s like a safe-haven in this crazy Middle East,” he says.

He notes that something people often aren’t aware of is the fact that 40 per cent of the staff at Hadassah are Muslim and Palestinian. The patients, too.

“I think it’s something people don’t understand. They’re very used to the conflict. And this is what the media usually shows. But they are not used to the fact that Hadassah is very unique in that everybody is working together. Everybody is getting treated the same. Regardless of where you come from.”